Africans, Let Us Stand Up! The Filth Is Real And A Huge Problem. 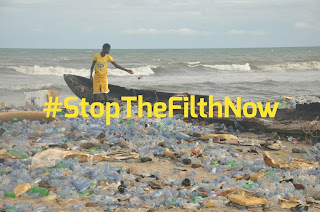 About fifteen African cities were ranked among the top twenty five most dirtiest cities in the world by Forbes.
This truly tells how the filth situation is worse and very intense in Africa.


Most countries on the continent are trying so hard to make their cities clean by pumping money into sanitation projects but it seem not to be working.

In Ghana - a small but very friendly country in West Africa - any president that takes up the mantle of ruling the country over the past few decades has talked and promised to make Accra - the capital city of Ghana - clean but their efforts seem not to be yielding the required results.

I do not blame the government of countries for filth in a particular city because issues of sanitation all comes down to how the citizens plays their part in the process of eradicating the filth.

Here are some few tips from the AwayCande health Team that can help make our Various African countries that are overwhelmed with filth clean and very attractive:

1. Plastic bags must be banned.
Plastics! Plastics!! Plastics!!!
Most of the filths are as a result of accumulated plastics; they do not rot or decay.
Most recycling companies are trying their best to reduce plastics in various cities by buying from the locals rubbers and plastics that are no more important or in other words, useless but it seem not to be solving the problem.
For instance, there are several recycling companies in Ghana but the amount of filth is still increasing on daily basis.
Banning of polythene bags and plastics is the best solution to this awful filth that is degrading and swallowing our big and humble cities.

2. Citizens who drop wastes and rubbishes in prohibited areas must be fined and dealt with severely.
People often dump waste and rubbish into gutters and places that they are not suppose to do so.
Most gutters in Accra for instance are very choked due to such acts.
If the country decides to bring about a law that will scare people from engaging in such activities, the country will become very clean in no time.


3. Campaign should be launched to educate the citizens on how to avoid activities that brings about filth.
Most people are less educated when it comes to keeping the environment clean so if a campaign is launched and advertisements are been broadcast across all the media houses in the country, people will know and become more aware to things they are suppose to do and things they are not suppose to do as far as keeping the environment clean is concerned.


5. Government intervention
The government of the various African Countries should include sanitation on their priority list.
Dustbins, cleaning vehicles, resources and any other thing that improves sanitation should be provided by the government in order to promote and sustain cleanliness in our country and Africa at large.
#stopthefilthnow