Why is myopia on the increase? Is Lifestyle The Cause Of The Myopia Epidemic? 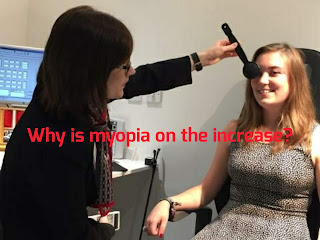 Over 2.5 billion teenagers and young adults around the globe are currently suffering from short-sightedness often referred to as myopia. According to World Health Organisation (WHO), over one million people gets affected in every week.

Health researchers have come out to made it clear that if nothing positive is done to resolve the situation, the number of affected people will increase from 2.5 billion to about 5 billion by 2050.
Myopia affects over 50% of young adults in the US and Europe. In Asia, over 90% of teenagers and young adults are been affected.
Several lifestyles have been pointed out by health experts as the cause of these unprecedented rise in myopia cases among young adults of nowadays.

Here are the lifestyles that popped up:

1. Less time spent outdoors.
Children who spend less time outside often develop myopia according to a recent study.
The health experts behind the research suggested that, allowing your children to spend more time outside than inside can significantly help prevent myopia.

2. The Use Of Smartphones.
Children who uses Smartphones for longer hours almost each and every day tend to develop myopia easily.
The lesser the time children spend on their , the lesser their chances of developing myopia.

3. Frequent watching of Television.
Children and young people who watch television a lot are very likely to be affected by myopia.
If you really want to protect your children from myopia, you should probably limit the time they spend behind television.

4.  Spending long hours behind a computer.
Most of the teenagers and young adults who were diagnosed with myopia were known to spend longer hours behind the screen of computers during their childhood.

Limiting the time children spend behind computers is known to be healthy and can prevent myopia as well.