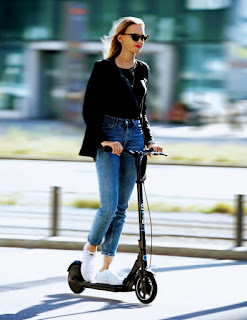 Most people started escaping daily city traffics with bicycles and then it moved on to motorcycles; Now the use of e-scooters seem to be the whole new way to escape traffic in most popular cities -- including Paris.

In Paris nowadays, people search for  electric scooters with an app on their smartphones and then go for them to run errands and go about their daily activities that involves moving from one place to another without been affected by heavy daily traffic.

Most individuals who often use the e-scooters were interviewed by a major German news outlet -- Deutsche Welle -- and some of the things they said was intriguing.
A guy who was one of the interviewees  said he used to pick up his son from school with his car but then opted out for an e-scooter and started picking his son up with it since it will help him dodge the heavy traffic he used to encounter with his car. According to him, electric scooters are a real alternative to city traffic and almost all of the people who were interviewed were in support of that idea except one who thinks the speed of electric scooters is a major problem.

Most experts are also in support of the idea that e-scooters are a huge problem to the environment due to their ability to hit a speed limit of twenty miles per hour (20 mph); this they think can sometimes knock people on their footpaths down accidentally.

Other experts on the other hand thinks that e-scooters are environmentally friendly and can help reduce traffic in cities.
The truth is that, e-scooters can help escape traffic so why not try it if you are someone who often gets stuck in a traffic in your city.

We from AwayCande would advise you to always put on your helmet whenever you are on your e-scooter. Be safe!!!