Families desperate to adopt a baby found in a plastic bag

She was heard crying by residents and that resulted in them (residents)  informing the police.

The police who rescued her has made available a very sad and distressful bodycam footage of an officer opening up a plastic bag in which she was wrapped up in.

The doctors of the hospital, where she was taken to by the officers, announced that she was unharmed.

After few weeks of her rescue, she is apparently doing great in terms of her health and mood, in a child services custody.

She will be at the custody of child services until a permanent home is found for her.
Her mother or relatives has not been identified yet.

Her rescue made waves around the globe with many describing it as a wonderful miracle. 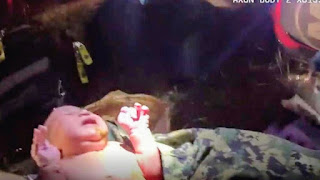 She has been nicknamed "India".

Several families around the world  apparently, wants to adopt her.