on June 27, 2019
Angela Merkel has once again been spotted trembling in Berlin on Thursday (that's 27 June, 2019). Eight days ago, similar incident occurred.

On Thursday (that's 27 June, 2019), the video that surfaced showed Angela Merkel gripping her arms. Her entire body was truly shaking.

After roughly 3 minutes, she looked okay and went on to shake hands with the new justice minister.

She refused to drink a glass of water which was offered to her. 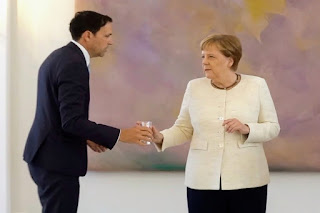 The previous trembling she endured, according to her, was as a result of dehydration.

Angela Merkel, who is now 64 years old, last trembled during an occasion where she was standing just near the president of Ukraine, Volodymyr Zelensky.
According to her, she became okay after taking in some water.

Everybody really hope everything is literally fine with Chancellor Angela Merkel.
HUMAN RIGHTS