Anthony Joshua just suffered his first defeat in professional boxing which saw him lose his IBF, WBA, WBO  world titles to Andy Ruiz Jr on 1st June, 2019. All boxing fans around the globe are completely stunned. It is a shock!
Apparently, this is his first fight in the USA. 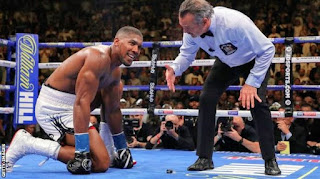 Anthony was knocked out in the 7th round.
Prior to this fight, Joshua had won 22 fights, 21 by knockout, no lost, making him the favourite but unfortunately Ruiz, who before the fight was referred to as the underdog by many, caused one of the biggest shocks in the history of heavyweight boxing.

Joshua has now joined the few dominant boxing champions who has suffered a lost that shocked the whole world. Mike Tyson and Lennox Lewis are some of such boxers.

According to reliable sources, there will be a rematch before the year, 2019 ends.
SPORTS