on July 12, 2019
British singer and songwriter, Ed Sheeran, in an interview, confirmed that he has literally wed his childhood friend, Cherry Seaborn.
Yeah, Sheeran is a married man.

The interview, in which he revealed this, was about his new collaboration album.

One of his new song, Remember My Name, which features Eminem and 50 Cent had a line in its lyrics which says Seaborn is his wife. 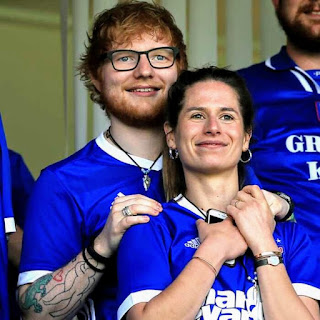 When discussing the lyrics, Ed Sheeran revealed that he knew by the time the song would be out he and Seaborn had tied the knot that is why he included those lines in the lyrics of the song.

According to him, the lyrics of the song was written before he and Seaborn made the marriage official.

In January 2018, Ed Sheeran announced that he and Seaborn were engaged.
ENTERTAINMENT