Flame-Throwing Drones Are Real And Can Be Bought

Drones were used for many things including transportation and capturing of videos and images but now, most of them have been upgraded to be able to spit fire with the help of flamethrowers.
The TF-19 WASP drone from Throwflame is an example of such drones and can shoot targets from over 25 feet with flames.

A gallon of fuel can be fired by this drone in exactly 100 seconds.

The WASP, which is the flamethrower should be mounted on a drone to acquire the complete fire-throwing drone setup.
The WASP was apparently made from carbon fibre. 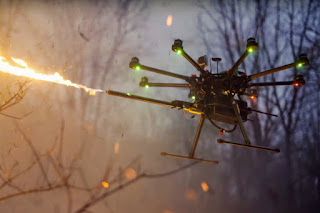 According to the company, flamethrower, TF-19 WASP was built in such a way that, it can withstand any kind of condition. It was actually made for industrial use.

These drones which are capable of shooting flames can also be used for clearing debris from power lines, managing pests, eliminating of nests, remote agriculture burns and many more.